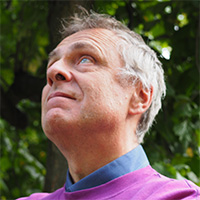 I received my degree in Architecture from the Polytechnic of Milan, Italy, long ago, when Architects were not supposed to make use of computers.

I have been writing software since when I was at high school. That was the time of the first computers that individuals could afford to buy.

After my degree, I had the rare chance of attending a one-year course in computer graphics at my university, a course that would not be further replicated. The course focused on graphics algorithms, but during that year I also learned to work with a 'serious' programming language. It has been a wonderful year. The course made me realize that I was much better at writing code than at building houses.

During the one-year compulsory military service I was in charge of installing the first PC in the administrative office of a military airport, which was at that time still paper-based. That was the beginning of my career in programming.

Later, again by chance, I found myself busy with writing code for Dutch multimedia artists. This has been a period of great creativity: lots and lots of code were written for entirely different settings. To my great surprise, this period lasted many years: it paid my bills until the great crisis hit the world. The Netherlands were not generous with media artists anymore.

It is again by pure chance that I found a new home here at the University of Bern. When it comes to software, the needs of university researchers are not as wildly varied as those of media artists, but, as it happens, researchers can surprise.